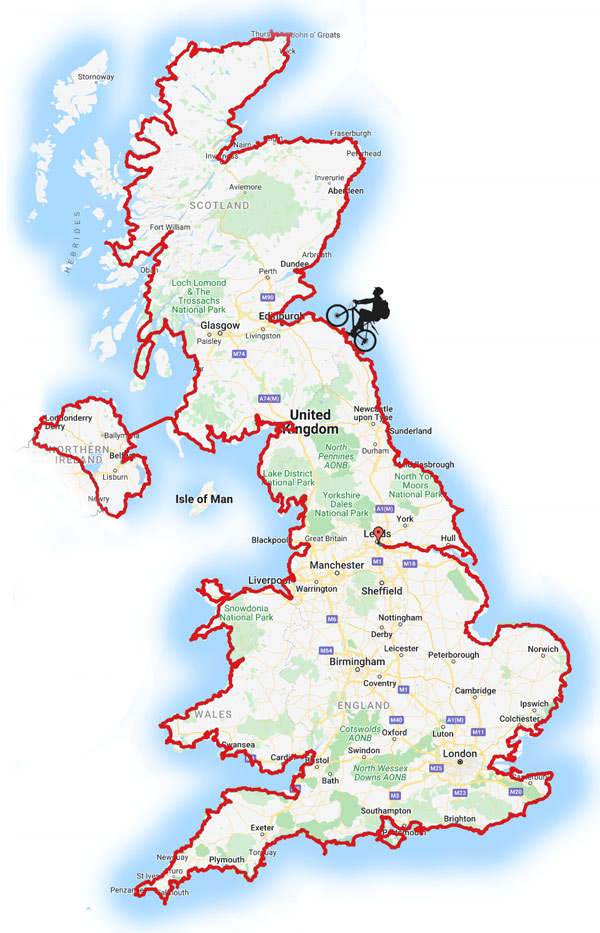 Ever had a crazy idea that you just can't get out of your head? Yep, that's pretty much what this challenge is about! I can't remember now when I first had the idea or where it came from, but one day I just thought to myself "wouldn't it be great to cycle around the UK coast?" (as you do). And no matter how much I tried to forget about it I just couldn't - eventually I figured the only way to shift the thought would be to actually attempt the ride....

So, earlier this summer, I set off on a crazy attempt to cycle the coastline of mainland UK, riding approximately 5000 miles over 4 months. Setting off from my home in Leeds, I first headed to Hull before turning north to start cycling round the coast at an average pace of around 40 miles a day. I'm hoping to finish by mid-November.

And as I'll be away for 4 months I'll also be doing some work in the evenings (my mortgage still needs paying after all!), testing the modern day trend of remote/flexible working to the extreme!

You can follow my journey on Instagram (@CyclingTheUK), or see a map of how far I've cycled to date.

For fun, I think?? (and because maybe I'm a little bit crazy?!). I've done a couple of long distance cycle tours before and just loved the freedom, the scenery, and the people I met and experiences I encountered. And cycling around the coast of the UK sounds like an awesome challenge!

I also want to use this challenge to raise as much money as I can for Cancer Research UK to support the phenomenal work they do. I lost my step-mum to lung cancer last year and have had melanoma myself, so know all too well how vitally important cancer research is. Please see my page on JustGiving for the full story and my personal reasons as to why I'm supporting this fantastic cause.

The cost of living is crazy at the moment and so I have no expectations about raising much money during these times, however if you feel that you are able to give anything at all to Cancer Research UK then I'll be truly grateful. Thankyou.

On the face of it, "cycling the coast of the UK" sounds like a really easy challenge to define - surely you just stick to the coast, right? Errr, no! It turns out not to be quite that simple.

On the Isle of Wight during Cowes Week, 2018

As I started planning the route I came across more and more complications about how to define cycling the coast. Sure, when you zoom out of a map and look at my provisional route in small scale (like the map above) then it looks like I'm keeping to the coast. But how close to the coast do I actually have to cycle to be able to call it a round-the-coast ride? Do I have to be right next to the coast the whole way? Or even have it in sight?

If there's no roads next to the coast do I have to take a footpath instead? What about in very remote areas, such as parts of Scotland, where there are no roads at all for miles around, or where the coastal road ends as a dead end? Do I need to ride around any islands? And what about estuaries and rivers - how far inland do I have to cycle before crossing to classify it as "the coast"?

If I tried to literally stick right next to the coast of the entire UK, tracing all nooks and crannies (as someone hiking the coast might), then it would surely be over 10,000 miles and take me nigh on 2 years (at least!) to complete. I'd also likely have to push my bike over some rough terrain too. And that didn't sound too appealing - I'm only doing this ride for fun after all!

So as I was planning my trip I thought it'd be sensible to develop a definition and set of navigation rules to try and stick by. Everyone who's done this trip before me (of whom there are quite a few) has followed their own guidelines, however the following is what I've settled on:

The overall route works out as anywhere between 4,500 miles to 5,000 miles, depending on various factors. I'll be aiming to keep up an average pace of about 40 miles a day (with some rest days, including a couple of fast visits back home), staying in a variety of accommodation ranging from camping, to B&B's, youth hostels, with family & friends, and hotels. Basically, wherever is cheapest and available!

The following is my very approximate schedule (updated September 18th). Dates are likely to change slightly - especially later in the tour - although I'll periodically update these estimates.

Further, as I'm now behind my original schedule due to extra rest days, I may finish the trip for this year at the roughly halfway point in Liverpool (early October) and cycle Wales and southern England next year. We'll see how it goes....!

If you're nearby at any point please give me a shout; it's always good meeting people en-route! (andy@cyclelejog.com)

Head to the "My progress" page to see where I've cycled so far.

My introduction to the world of cycle touring happened many years ago at university (more years ago than I care to remember...) when I stumbled one day across an early blogging website for people who were cycling coast-to-coast across the US (a more popular thing to do than you may think!). 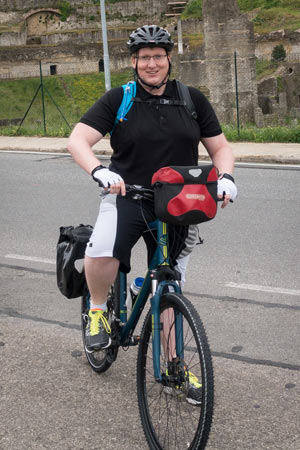 The face of naivety...! The morning of day 1 of my Tuscany trip in 2016 - the very beginning of my cycle touring experience. The hills that day nearly killed me!

The stories people told there sounded like an amazing adventure - the freedom to go where they wanted, the interesting people they met, the stunning scenery they experienced. I'd always enjoyed cycling as a child, and reading those blogs I decided then - in my young dreamy naivety of life - that this was an adventure I must make one day.

Over the next few years after leaving university I concentrated on life and my career but never forgot about the dream of the TransAm ride. I also thought (wrongly) that cycling 4000 miles was something I'd need to become superfit first in order to do (that sounds like a reasonable assumption doesn't it?), and that "one year" I'd get around to working on my ironman level of fitness (yeah right!) in preparation.

Fast forward then to 2016 and I joined a week-long group cycling holiday in Tuscany, Italy. One of the cyclists in my group had himself recently cycled the length of the UK from Lands End to John o'Groats (aka "LEJoG") and described how much fun it was. Hmmm, I thought, maybe you don't need to be superfit to do these long distance rides after all?? 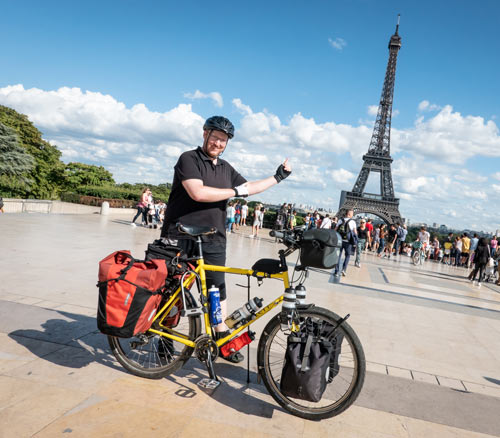 In front of the Eiffel Tower, Paris. August 2018

So after landing back in England I went straight from the airport to a bike shop - even before returning home - and bought a cheap touring bike. Within 4 weeks I was on a train down to Lands End starting the LEJoG challenge for myself. Those 4 weeks of touring were simply amazing; I was hooked.

Fitness wasn't an issue either - start slow and the ride is the fitness training itself.

After returning home I then began to think again about my TransAm dream. I'd learnt a lot about cycle touring doing LEJoG, but for a trip as major as a solo coast-to-coast ride across the USA I knew I still had a lot to learn and that a couple more rides at least would be useful (along with a few visits to the fantastic Cycle Touring Festival to learn from others). So in 2018 I did another solo tour from Leeds to Amsterdam via London, Paris, and Brussels (my first solo cycling tour abroad), and joined an organised 2-week cycling holiday in Albania in 2019 (my first time of taking a bike on a plane). In 2020 I decided I was ready for a TransAm ride, and began planning in earnest. June 4th 2020 was set as my departure date.

Sadly however COVID-19 had other ideas, and devastatingly I had to cancel (in the scheme of all things Covid though, having to cancel an adventure abroad is hardly a hardship and I count myself very lucky compared to the impact that Covid had on countless others).

Whilst COVID is now all but over and life is getting back to normal (famous last words...!), and whilst I'd still love to do TransAm one day, I figured a ride closer to home would be better for now just in case the pandemic flared up again and made travelling difficult whilst I was away. Hence the idea to cycle the coast of the UK. What better way to explore your country than by bike?

Cocklawburn beach, Northumberland, during my LEJoG ride in 2016. I'll try to recreate this photo when I pass this point again!

Why am I doing this?